Calvin Bridges (1889-1938) is perhaps best known as one of the original Drosophila geneticists in world. As an original member of Thomas Hunt Morgan’s Fly Room at Columbia University, Bridges made fundamental contributions to classical genetics, notably contributing the first paper ever published in the journal Genetics. The historical record on Bridges is scant, since Morgan and Alfred Sturtevant destroyed Bridges’ papers after his death to preserve the name of their dear friend whose politics and attitudes to free love were radical in many ways. Morgan’s biographical memoir of Bridges presented to the National Academy of Sciences in 1940 contains very little detail on Bridges’ life, and this historical black hole has piqued my curiosity for some time.

Recently, I stumbled across a listing in the New York Times for an exhibit in Brooklyn recreating the original Columbia Fly Room, which will be used as a set in an upcoming film of the same name directed by Alexis Gambis. Gambis’ film approaches the Fly Room from the perspective of a visit to the lab by one of Bridges children, Betsy Bridges. I recommend other Drosophila enthusiasts to check out The Fly Room website and follow @theflyroom and @alexisgambis on Twitter for updates about the project.

In digging around more about this project, I found a link to the Kickstarter page that was used to raise funds for the film. This page includes an amazing story about Bridges that I had never heard about previously. Apparently, after Morgan and his group moved to Caltech in 1928, Bridges built from scratch a futuristic car of his own design called “The Lightening Bug”. This initially came a big surprise to me, but on reflection it is in keeping with Bridge’s role as the main technical innovator for the original Drosophila group. For example, Bridges introduced the binocular dissecting scope, the etherizer, the controlled temperature incubator, and agar-based fly food into the Drosophilist’s toolkit.

Here is a clipping from Modern Mechanix from Aug 1936 describing the Lightening Bug:

Bridge’s Lightening Bug was notable enough to be written up in Time Magazine in May 1936, which described his car as follows:

It is almost perfectly streamlined, even the license plates and tail-lamp being recessed into the body and covered with Pyralin windows flush with the streamlining. There are no door handles; the doors must be opened with special keys. Dr. Bridges pronounced the Lightning Bug crash-proof and carbon-monoxide-proof. “My whole aim,” said he, “was to show what could be done to attain safety, economy and readability in a small car.”

Newshawks discovered that for months, when he got tired of looking at fruit flies, the geneticist had retired to a garage, put on a greasy jumper and worked on his car far into the night, hammering, welding, machining parts on a lathe. Now & then, the foreman reported, Dr. Bridges hit his thumb with a hammer. Once he had to visit a hospital to have removed some tiny bits of steel which flew into his eyes. It was Calvin Bridges’ splendid eyesight which first attracted Dr. Morgan’s interest in him when Bridges was a shaggy, enthusiastic student at Columbia. 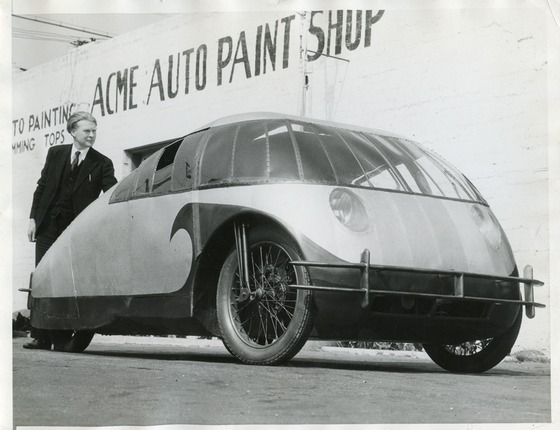 Calvin Bridges next to the Lightening Bug (Time Magazine, 4 May 1936).

Gambis has also posted a video of the Lightening Bug being driven by Bridges taken by Pathé News. Gambis estimates this clip was from around 1938, but it is probably from 1936/7 since Bridges died in Dec 1938 and by the time Ed Novitski started graduate school at CalTech in the autumn of 1938 Bridges was terminally ill, but appears fit in this clip.  This clip clearly shows the design of Bridges’ Lightening Bug was years ahead of its time in comparison to the other cars in the background. I also would wager this is the only video footage in existence of Calvin Bridges.

The only other information I could find on the web about the Lightening Bug was a small news clipping that was making the rounds in local new April/May 1936:

Interestingly, the only mention I can find of this story in historical accounts of the Drosophila group is one parenthetical note by Shine and Wrobel in their 1976 biography of Morgan that had previously escaped my notice. On page 120, they discuss how Morgan handled the receipt of his 1933 Nobel Prize in Physiology or Medicine (emphasis mine):

…Morgan was very modest about the honor. He frequently pointed out that it was a tribute to experimental biology than to any one man….As Morgan acknowledged the joint nature of the work, he divided the tax-free $40,000 award equally among his own children and those of Bridges and Sturtevant (but not of Muller’s). He gave no reason; in the letter to Sturtevant for example, he said merely I’m enclosing some money for your children. (Bridges, however, is said to have used his to build a new car.)

So there you have it: Calvin Bridges, Drosophila geneticist, was also an unsung automotive pioneer whose foray into designing futuristic cars was likely funded in part by the proceeds of the 1933 Nobel Prize!