Over the last few months, I’ve noticed a growing number of reports about declining opportunities and increasing pressure for early stage academic researchers (Ph.D. students, post-docs and junior faculty). For example, the Washington Post published an article in early July about trends in the U.S. scientific job market entitled “U.S. pushes for more scientists, but the jobs aren’t there.” This post generated over 3,500 comments on the WaPo website alone and was highly discussed in the twittersphere. In mid July, Inside Higher Ed reported that an ongoing study revealed a recent, precipitous drop in the interest of STEM (Science/Technology/Engineering/Mathematics) Ph.D. students wishing to pursue an academic tenure-track career. These results confirmed those published in PLoS ONE in May that showed the interest to pursue an academic career of STEM students surveyed in 2010 showed evidence of a decline during the course of Ph.D. studies:

Figure 1. Percent of STEM Ph.D. judging a career to be “extremely attractive”. Taken from Saurman & Roach (2012).

Even for those lucky enough to get an academic appointment, the bad news seems to be that it is getting harder to establish a research program.  For example, the average age for a researcher to get their first NIH grant (a virtual requirement for tenure for many biologists in the US) is now 42 years old. National Public Radio quips “50 is the new 30, if you’re a promising scientist.”

I’ve found these reports very troubling since, after over nearly fifteen years of slogging it out since my undergrad to achieve the UK equivalent of a “tenured” academic position, I am acutely aware of the how hard the tenure track is for junior scientists at this stage in history. On a regular basis I see how the current system negatively affects the lives of talented students, post-docs and early-stage faculty. I have for some time wanted to write about my point of view on this issue since I see these trends as indicators of bigger changes in the growth of science than individuals may be aware of.  I’ve finally been inspired to do so by a recent piece by Euan Ritchie and Joern Fischer published in The Conversation entitled “Cracks in the ivory tower: is academia’s culture sustainable?“, which I think hits the nail on head about the primary source of the current problems in academics: the deeply flawed philosophy that “more is always better”.

My view is that the declining opportunities and increasing malaise among early-stage academics is a by-product of the fact that the era of exponential growth in academic research is over.  That’s nonsense, you say, the problems we are experiencing now are because of the current global economic downturn. What’s happening now is a temporary blip, things will return to happier days when we get back to “normal” economic growth and governments increase investment in research. Nonsense, I say. This has nothing to do with the current economic climate and instead has more to do with long-term trends in the growth of scientific activity over the last three centuries.

My views are almost entirely derived from a book written by Derek de Solla Price entitled Little Science, Big Science. Price was a scientist-cum-historian who published this slim tome in 1963 based a series of lectures at Brookhaven National Lab in 1962. It was a very influential book in the 1960s and 1970s, since it introduced citation analysis to a wide audience. Along with Eugene Garfield of ISI/Impact Factor fame (or infamy, depending on your point of view), Price is credited as being one of the founding fathers of Scientometrics. Sadly, this important book is now out of print, the Wikipedia page on this book is a stub with no information, and Google books has not scanned it into their electronic library, showing just how far the ideas in this book are out of the current consciousness. I am not the first to lament that Price’s writings have been ignored in recent years.

In a few short chapters, Price covers large-scale trends in the growth of science and the scientific literature from its origins in the 17th century, which I urge readers to explore for themselves. I will focus here only on one of his key points that relates to the matter at hand — the pinch we are currently feeling in science. Price shows that as scientific disciplines matured in the 20th century, they achieved a characteristic exponential growth rate, which appears linear on a logarithmic scale. This can be seen terms of both the output of scientific papers (Figure 2) or scientists themselves (Figure 3). 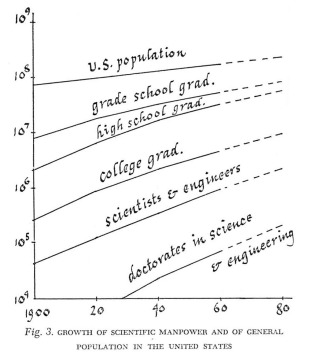 Price showed that there was a roughly constant doubling time for different forms of scientific output (number of journals, number of papers, number of scientists, etc.) of about 10-15 years. That is, the amount of scientific output at a given point in history is twice as large as it was 10-15 years before. This incessant growth is why we all feel like it is so hard to keep up on the literature (and incidentally why I believe that text mining is now an essential tool). And these observations led Price to make the famous claim that “Eighty to 90 per cent of all the scientists who have ever lived are alive now”.

Crucially, Price pointed out that the doubling time of the number of scientists is much shorter than the doubling time of the overall human population (~50 years). Thus, the proportion of scientists relative to the total human population has been increasing for decades, if not centuries. Price makes the startling but obvious outcomes of this observation very clear: either everyone on earth will be a scientist one day, or the growth rate of science must decrease from its previous long-term trends. He then goes on to argue that the most likely outcome is the latter, and that scientific growth rates will change from exponential to logistic growth and reach saturation sometime within 100 years from the publication of his book in 1963 (Figure 4):

Figure 4. A model of logistic growth for Science (taken from de Solla Price 1963).

So maybe the bad news circulating in labs, coffee rooms and over the internet is not a short-term trend based on the current economic downturn, but instead reflects the product of a long-term trend in the history of science?  Perhaps the crunch that we are currently experiencing in academic research now is the byproduct of the fact that we are in Price’s transition from exponential to logistic growth in science? If so, the pressures we are experiencing now may simply reflect that the current rate of production of scientists is no longer matched to the long-term demand for scientists in society.

Whether or not this model of growth in science is true is clearly debatable (please do so below!). But if we are in the midst of making the transition from exponential to logistic growth in science, then there are a number of important implications that I feel scientists at all stages of their careers should be aware of:

1) For PhD students and post-docs: you have every right to be feeling like the opportunities in science may not be there for you as they were for your supervisors and professors. This message sucks, I know, but one important take-home message from this is that it may not have anything to do with your abilities; it may just have to do with when you came along in history. I am not saying that there will be no opportunities in the future, just fewer as a proportion of the total number of jobs in society relative to current levels. I’d argue that this is a cautiously optimistic view, since anticipating the long-term trends will help you develop more realistic and strategic approaches to making career choices.

2) For early-stage academics: your career trajectory is going to be more limited that you anticipated going into this gig. Sorry mate, but your lab is probably not going to be as big as you might think it should be, you will probably get fewer grants, and you will have more competition for resources than you witnessed in your PhD or post-doc supervisor’s lab. Get used it. If you think you have it hard, see point 1). You are lucky to have a job in science. Also bear in mind that the people judging your career progression may hold expectations that are no longer relevant, and as a result you may have more conflict with senior members of staff during the earlier phases of your career than you expect. Most importantly, if you find that this new reality is true for you, then do your best to adjust your expectations for PhD  students and post-docs as well.

3) For established academics: you came up during the halcyon days of growth in science, so bear in mind that you had it easy relative to those trying to make it today. So when you set your expectations for your students or junior colleagues in terms of performance, recruitment or tenure, be sure to take on board that they have it much harder now than you did at the corresponding point in your career [see points 1) and 2)]. A corollary of this point is that anyone actually succeeding in science now and in the future is (on average) probably better trained and works harder than you (at the corresponding point in your career), so on the whole you are probably dealing with someone who is more qualified for their job than you would be.  So don’t judge your junior colleagues with out-of-date views (that you might not be able to achieve yourself in the current climate) and promote values from a bygone era of incessant growth. Instead, adjust your views of success for the 21st century and seek to promote a sustainable model of scientific career development that will fuel innovation for the next hundred years.