Awhile back I was piqued by a discussion on BioStar about “Where would you host your open source code repository today?“, which got me thinking about the relative merits of the different sites for hosting bioinformatics software.  I am not an evangelist for any particular version control system or hosting site, and I leave it to readers to have a look into these systems themselves or at the BioStar thread for more on the relative merits of major hosting services, such as Sourceforge, Google Code, github and bitbucket. My aim here is not to advocate any particular system (although as a lab head I have certain predilections*), but to answer the straightforward empirical question: where do bioinformaticians host their code?

To do this, I’ve queried PubMed for keywords in the URLs of the four major hosting services listed above to get estimates of their uptake in biomedical publications.  This simple analysis clearly has some caveats, including the fact that many publications link to hosting services in sections of the paper outside the abstract, and that many bioinformaticians (frustratingly) release code via insitutional or personal webpages. Furthermore, the various hosting services arose at different times in history, so it is also important to interpret these data in a temporal context.  These (and other caveats) aside, the following provides an overview of how the bioinformatics community votes with their feet in terms of hosting their code on the major repository systems…

First of all, the bad news: of the many thousands of articles published in the field of bioinformatics, as of Dec 31 2012 just under 700 papers (n=676) have easily discoverable code linked to a major repository in their abstract. The totals for each repository system are: 446 Sourceforge, 152 on Google Code, 78 on github and only 5 on bitbucket. So, by far, the majority of authors have chosen not to host their code on a major repository. But for the minority of authors who have chosen to release their code via a stable repository system, most use Sourceforge (which was is the oldest and most established source code repository) and effectively nobody is using bitbucket.

The first paper to link published code to a major repository system was only a decade ago in 2002, and a breakdown of the growth in code hosting since then looks like this: 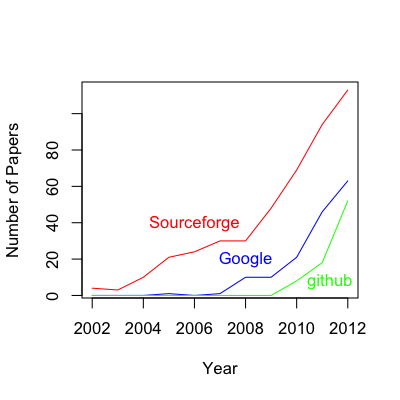 A few things are clear from these results: 1) there is an upward trend in biomedical researchers hosting their code on major repository sites , 2) Sourceforge has clearly been the dominant players in the biomedical code repository game to date, but 3) the current growth rate of github appears to be outstripping both Sourceforge and Google Code. Furthermore, it appears that github is not experiencing any lag in uptake, as was observed in the 2002-2004 period for Sourceforge and 2006-2009 period for Google Code. It is good to see that new players in the hosting market are being accepted at a quicker rate than they were a decade ago.

Hopefully the upward trend for bioinformaticians to release their code via a major code hosting service will continue (keep up the good work, brothers and sisters!), and this will ultimately create a snowball effect such that it is no longer acceptable to publish bioinformatics software without releasing it openly into the wild.

18 thoughts on “Where Do Bioinformaticians Host Their Code?”